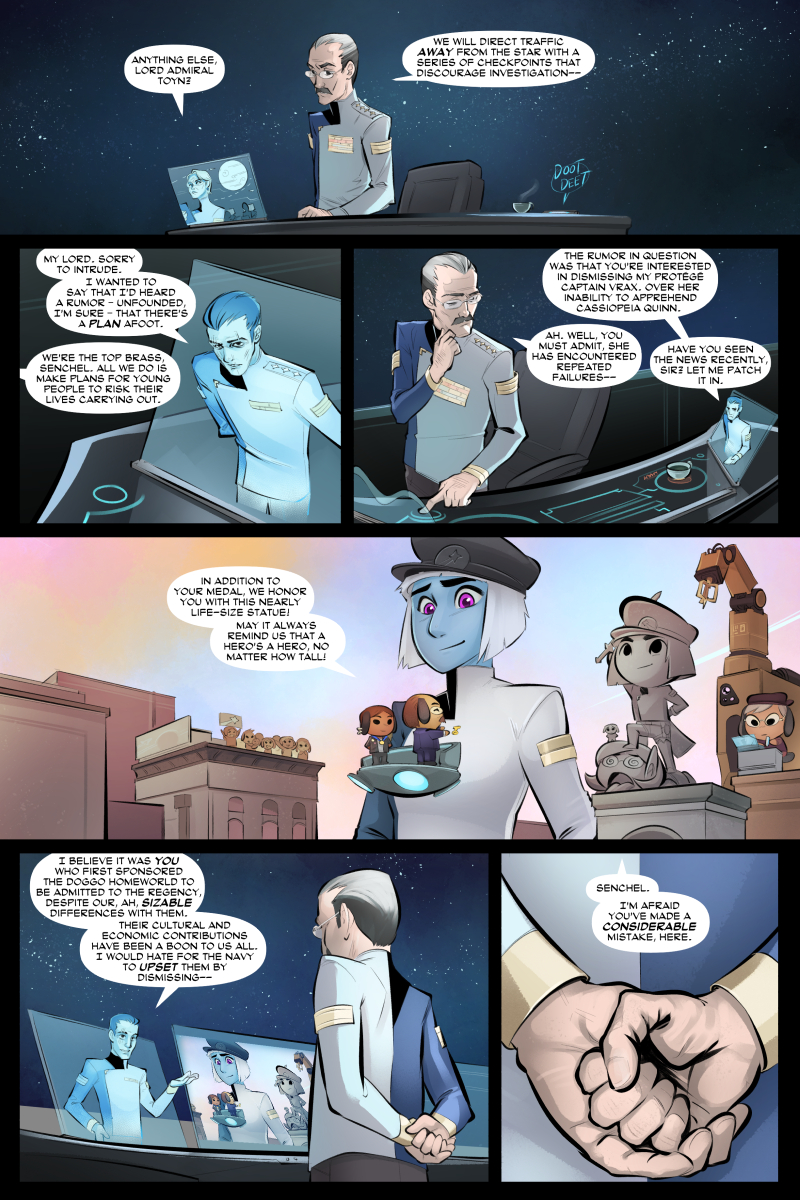 The Cassiopeia Quinn Patreon has launched!

Hey, folks! Have I mentioned lately how great you are? How insightful your comments have been? How nice that shirt you're wearing looks? No?

Okay, the truth is, I'm buttering you up because we need something from you. See, we love making Cassiopeia Quinn. And I do mean love it. We've been very fortunate, and also worked very hard to make it this far.

It's just, uh, the comic is quite time-consuming - you already know we had to cut back to one update a week to keep up. And even then, there are struggles for all of us (including Brellom, who helps with colors around these parts) to make the schedule and do a good job. It doesn't help that there are ever-increasing financial pressures in all our lives that the comic has sometimes been, uh, the opposite of helpful with, since it's so much work.

In an attempt to fix this, and let us keep bringing you Cassiopeia Quinn, we're doing like so many other great webcomics out there (for instance, our idols and mentors at The Rock Cocks) and launching a Patreon. What's that mean? Well, it's not just a tip jar - we want to give you rewards if you throw some money in to let us keep the comic going. Page previews, for instance. A look at concept art you can't see anywhere else. Stories and sketches we haven't found a way to release yet. That kind of thing. If it takes off, we'd like to start producing some original content for Patrons only, too - some sexy pinups of the cast, for instance. Oh, yes. Mmhmm.

Anyway, it's really cool stuff we're offering anyone who contributes, and to show we mean business, the first thing we're sharing is a look at a Cassiopeia Quinn sketch by Adam Warren, who brings you Empowered. You can check it out now, no cover charge, just for taking a look at our Patreon page. It's important to give you an idea of the kind of stuff we'll be doing.

The comic itself is always going to remain free, obviously. That's why we do what we do. But if you dig it enough to help us keep it comin', we aim to reward you. Check it out! You'll be doing us a big favor.

Not gonna lie, I hate the news recently. And I'm scared all the time. And today's news looks especially terrible. I'm currently nervous and anxious right now cause starting today I'm going to be moving from my apartment. And there are some unknown things coming up. I don't know if I like where I'm at, but I'm glad I get to do a comic and just work through it for now.