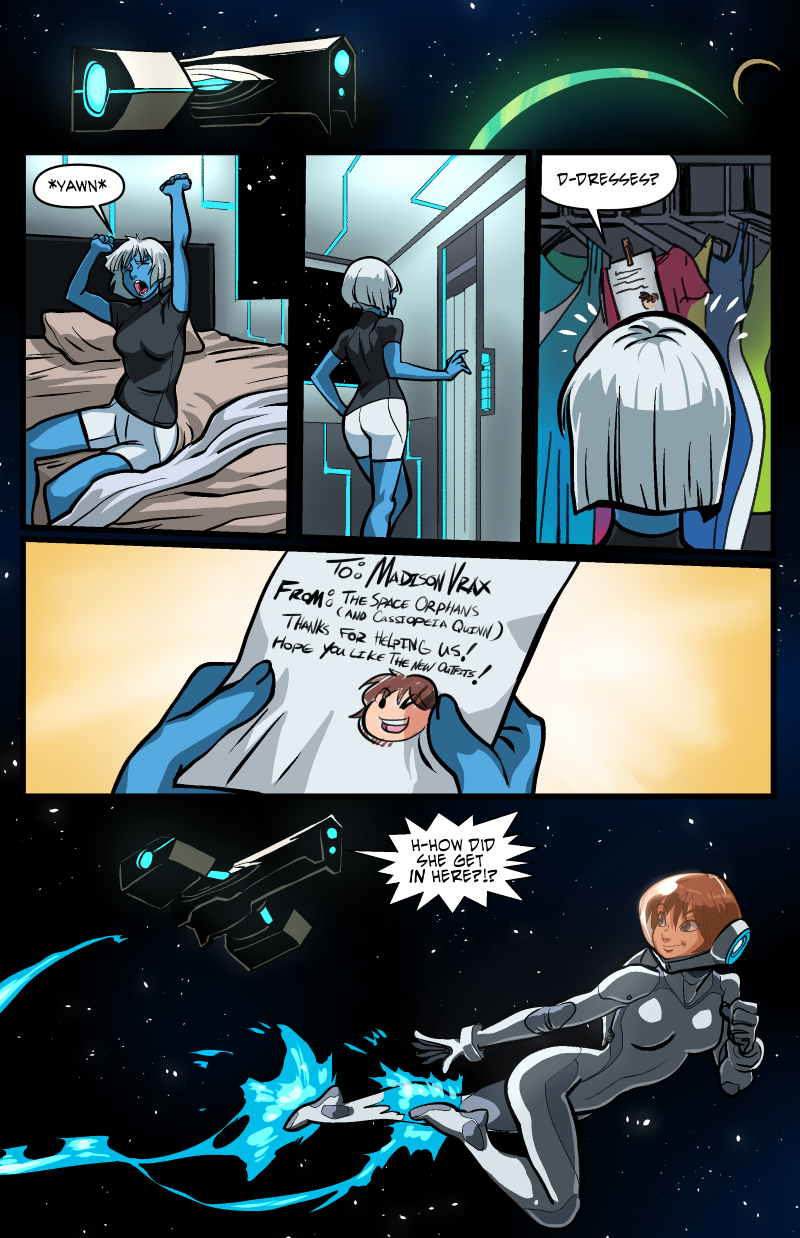 The Cast page has been updated.

Our friends at Miss Melee gave us this lovely guest comic! We'll resume with a normal update next time, so you can find out exactly why the Lord Admiral's fist was getting so clenchy, but we had to run this, didn't we? Look at the cute yawning Maddy! Look at her! Then check out Miss Melee if you haven't yet, although I keep telling everybody I meet to do so.

Speaking of people giving us nice things... as I write this, the Cassiopeia Quinn Patreon is less than fifteen bucks from unlocking those monthly (and sexy) pinups by Psu! In fact, it's already passed the goal for that Interview story we've wanted a way to release basically since the first comic came out - it'll be available next month! Yes,  even to non-Patrons, as promised. We'll do a post about it when it's time. And then we'll have to add another milestone goal... we've got some ideas, but what would you guys like to see?

The aid of you nice folks who kicked in is granting necessary time and money to sustain the comic, so I want to thank all 63 people who've joined us, and I hope you're enjoying the goodies we're giving back. I just know you're gonna push us over the top on those pinups soon - and if anyone reading this goes "Ah, it's a good time to join, if those are coming!" (you're right) then make sure to check out the posts we've already made for other cool stuff.

Oh, and remember... whether you can throw in some money or not, it means a lot to us simply that you're a reader.

Thanks for being here for the comic, guys.

Psu's status report, I have now successfully moved. There's still this big issue of having way more books than I reasonably know what to do with. I'm starting to think of them as a hassle, collectively they take up the most space out of any one other thing I own and that includes furniture and mattress. It's really too much and absolutely has proven more trouble than it's worth. While I like the idea of a collection, a collection is harder to maintain than the entertainment value of having them around.

Ultimately, I figure I'll re-read maybe one or two percent of this total collection that takes up so much wall space. And in the future more of my reading will definitely be on the new digital formats. While there's less physical pleasure in reading these things digitally, it's going to be much easier to move a laptop than it is to move hundreds of comics along with appropriate shelves and storage.

On the plus side, I've got a brand new bright red couch. It's not the most comfortable, in retrospect I'd like one with a head rest. But it was one I could afford, much thanks to your support. It is a nice thing to have finally gotten one of my own, and certainly makes popcorn and movies much better.