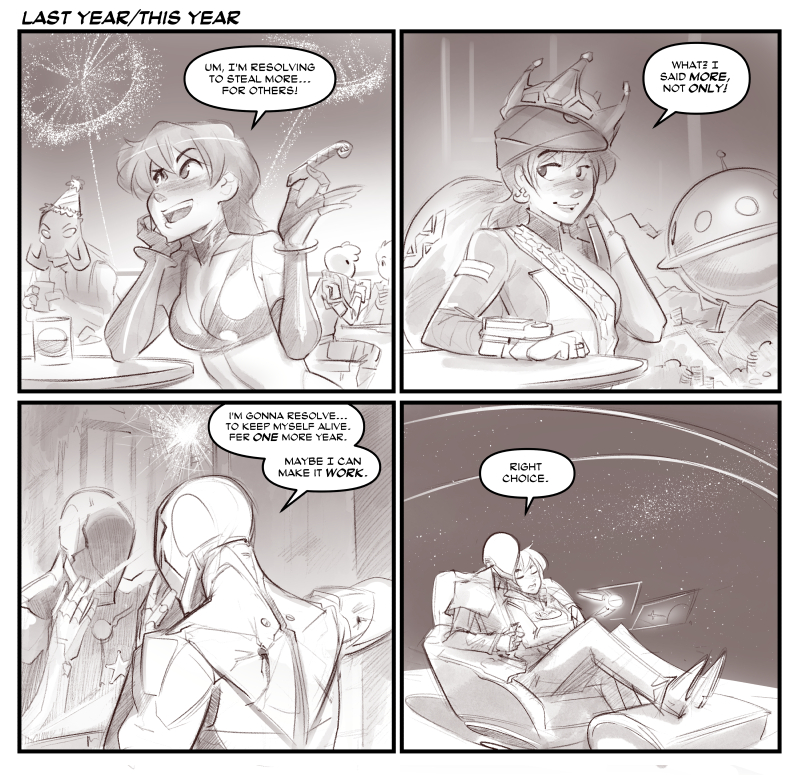 That makes three updates this week, because Psu's a nutbar. The cast page will be added to before the next update, which should help to explain some of the little cameos a bit better. Everybody should get their own natural introduction, of course, but it never hurts to have a cheat sheet, especially when the Vanaa are so short on faces...

Weirdly, this is probably the single Cassiopeia page the two of us had the most tense disagreements about, which sucks because we're good partners and probably even better friends. I still love it, though, 'cause it's got the first outfit Cassiopeia was ever drawn wearing in in panel one (along with some characters designed by a friend of ours in the background), a buncha silly sci-fi references in panel two, serious-as-heck hints about Zeke's past in panel three and (I intend, anyway) a hopeful note in panel four. Maybe it causes tonal whiplash (I'd love to hear about it if it does, 'cause I'm still new at this) but it's certainly something I'm glad I tried writing.

Plus I always like to call for a drawing of Cassiopeia and Zeke snuggling. You'll see it so often you'll get sick of it, I assure you.

Mornin 2015, how was your day? Mine would've been better if IHOP was actually open 24/7. My whole life I thought they were open 24/7 and the time I really desire pancakes at one ridiculously early morning hour while living close to an IHOP, and I discover they actually do close. My whole life has been a lie.

Unrelated to that, it seems I won't be doing End of SteamSale Day Adventures this Christmas Steam Sale and I'm actually super sorry for that. But there's a perfectly good reason this year, it ended pretty much the same day I paid my share of rent. Hahaaaaaa....

Okay, so I'm totally gonna vow right now to make more money off of art. More on that news to come. It's mostly good, for sure!