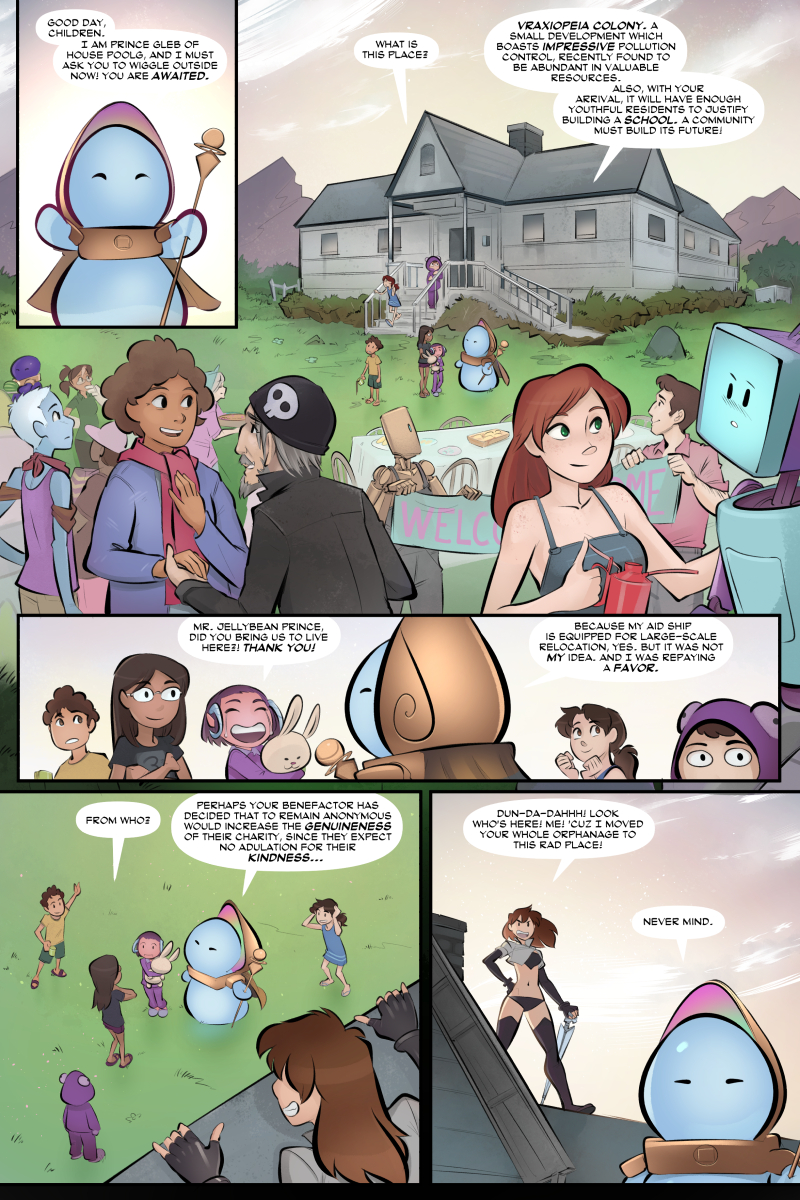 Our Miss Melee guest shot is up! Go enjoy it and that whole comic, please!

So, last week I went stargazing with a proper chart and optics and stuff, and saw the Andromeda galaxy (Of Mass Effect fame!) for the first time. It was really cool and interesting. Then, on the walk home, because it was so dark and I was in the mountains and I idiotically shut my light off once I could see my destination... I fell in a ditch full of rocks.

To make a long story short, I went on a trip, sprained both wrists, and now hate nature. But since that my fingers are mostly moving properly again, I've decided to finally play Mass Effect 3, and holy crap, a family member bought me the game used on 360 for like five bucks, which is great, right? But there's almost fifty dollars worth of story DLC. I'm going to have to wait until the gaming budget allows for that kind of expenditure to break it open. I've only heard good things about that content, so I can't skip it! Uh, right? ME fans, what say you?

Speaking of good things (and things tangentially involving stargazing), if you're not much of a comic reader but might like to be, then I wanna suggest checking out the recently-released Wonder Woman #2 by Rucka and Sharp. It is, at last, Greg Rucka writing the Wonder Woman: Year One story he's had in mind forever, and while I can't promise it'll become as character-defining as Batman: Year One, I can say it's excellent comics and worth the cover price. That storyline will be running in alternating issues, and if it's as good as the inaugural one, you'll probably catch me praising it again. Like, if you don't buy it now, when the trade comes out, I'll probably be telling everyone to get that. But why wait? You don't even have to track down a comic store (though I think you should). You can purchase it digitally here.

If you've been following the comic, you must've noticed the staggered updates for the last two weeks. And it's entirely because I can be an emotional and sentimental wreck. Let me explain what happened. So a couple weeks ago, I get a text message from my dad saying that our Cat is unwell. Like... she's in a really bad state. So I went ahead and visited, and I hadn't really realized how bad of a state she was in. My dad omitted some details from his message. She'd been missing for a couple days. When they got her back home, she couldn't walk anymore. She wasn't eating, and she was hardly moving.

So then I'm thinking, that's it. This is the last time I get to see her. I'd been dreading it all year really, she was pretty old. 16 years is old for an outdoors cat. I spend the evening with her, trying to get her to eat. I clean up her fur and her poop and so on. I just want nothing more than for her to be comfortable and unafraid. But then, I have to go back to my apartment cause I gotta get work done. I was depressed and all, but I thought I was ready to say goodbye.

I don't think me or my dad knew what to do. I think I would have called the vet right away. My dad did not, I'll get to the reason why a bit later. For the next two weeks I would occasionally visit the old home and visit the cat. I'd check up on her, encourage her to eat, etc. I'd stay with her and she'd purr happily enough whenever I was around. But whenever I'd eventually have to leave, I knew she'd spend the nights alone. Maybe she was scared. She was definitely hurting. And she was all I could think about most nights. I took to reading and my usual past time of following the news. I have to say watching American politics probably didn't help my mood much...

I'm a quiet type of person, I think. I don't show affection easily. But I tend to have a strong affinity for cats. They seem to like me back. My brother's cats, my roomates' cats, my Dungeon Master's cat when we played RPGs, cats and I tend to get along. I like to think it's a combination of knowing how to give them attention AND distance. And they're always welcome on my belly, except when they like to knock away whatever thing I'm reading.

Our Cat was more or less abandoned 16 years ago by a family member who stayed with us, before having a bit of a breakdown and having to leave. I won't get into details but one of the things they did while with us, was to suddenly adopt a little kitten. When my family member had to go, they left this poor little kitty with us. My dad just called her Cat. And so did I. And that became her name.

To be frank, she must've been a normal little cat. Prone to doing dumb things like clawing their way up your leg and being really adorable about it. Or hiding on whatever spot you were sitting on, just cause it was warm. Having little flecks of brown in her green eyes. The cat would be my oldest and most consistent friend, and she was always happy to see me. And so here we are and she was, hurting for weeks, lying in a makeshift bed my dad set up where she could reach her food and use the kitty litter without walking.

He hadn't called the vet yet, cause he was sure what the vet would say. If we brought her to the vet, that would almost certainly be the last of it. So we nursed her as much as we could, and though she seemed to be responsive and purring, she wasn't getting better. My dad, I think, took a little longer than I did to come to the necessary conclusion. We both figured that was that, and set up an appointment for last Saturday.

On Friday, I did what I could of the comic page. There was no way I was finishing it but I could get enough of it done that I could send it out to my assistant to flat. After that, I went home and got to spend one more night with the cat. And ya know what? Her appetite seemed to come back! She was more responsive than she'd been all week. She wasn't really moving but it was the first time I thought maybe she COULD move. Maybe it was just the fact that it was so close, but I was getting my hopes up.

I spent the last day carrying her around. She seemed to be purring and content at times, scared and tired at others. I fed her, her favorite snack of Vienna sausages. (I used to share those with her when I cooked at home after college.) By morning, I had begun to think, maybe the vet would have some good news. If the vet could say, she could walk again, or even if she would just limp for the rest of her life, even if would only be a few months or a year, I knew I was ready to take care of her for however long that was. I modified the carrying litter, unscrewing the top off and cushioned the bottom and put her in to take her on our last car ride together.

The vet was pretty clear there wasn't any realistic option for getting a miraculous recovery. We'd have to say goodbye then and there. It was the last thing I wanted for her, to be scared in some strange place at her end. But no one wanted her to hurt anymore. At the very least I could be there, so that she wasn't alone. I actually held her head in my hands and kept on petting her as the lights went out. I hoped she wasn't afraid. I hope she didn't dislike me for that. But mostly I hope she's resting now.