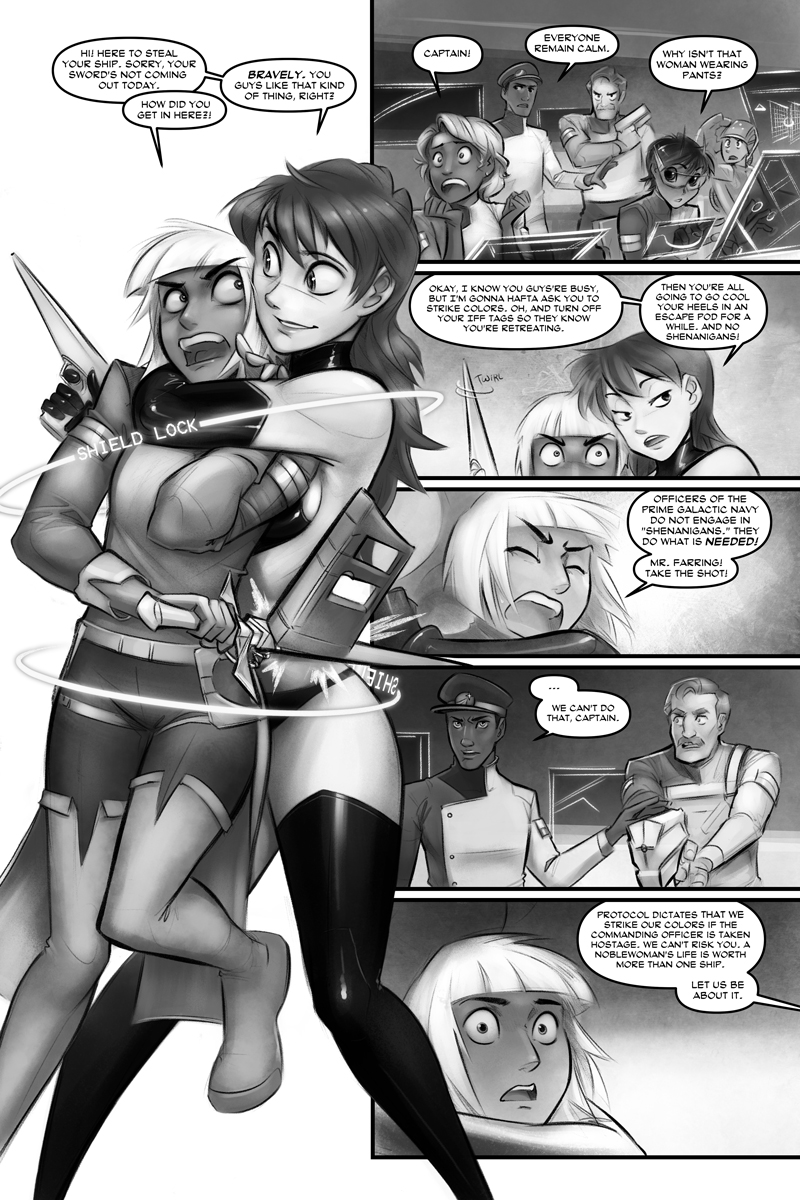 Eugh, what an overly-talky page. I did write it kind of a long time ago... aw, no excuses, just hafta do better next time. MOVIN' ON!

Let's talk about a good thing on this page that's not over-explained: the shield lock. Having the words there was not my idea this time (like it was on the helmet), but it makes total sense. If we'd planned for this to be released as a page-at-a-time webcomic in the first place, the personal shields would have been called out as such in the comic much earlier. I guess it'll at least still make sense if one reads through the archive in one go, and hits this page relatively quickly. I tell ya, it's gonna be weird to see this all go from more or less a real floppy-comic in pacing to something approximating a traditional webcomic, with a story beat or so on every page...

By the way, in addition to fresh bonus art for your delectation, please enjoy that we now have guest commenting, so that you can respond to the comic down below anonymously or pseudonymously or whatever the term is. We look forward to hearing from you and answering your questions!

This year marks the first year in many that I'll only be attending one day at New York Comic-con. I missed the first year, and ever since then it was a high priority to get to every single show. I meet friends, potential business contacts, artists, and get a good look at all kinds of fun shenanigans. But last year was kinda a rough one. It was also the hardest I worked to buy a ticket, waiting in a six hour long line on a busy new York City street. While I was amazed at the community, how easy it was to goof and chat with our fellow line captives, it should've been obvious already that this show is stretched at its seams. And when I actually got there, it was just as bad as one could imagine.

The show itself was fine, even if the big theater draws weren't all there it still had all the things I go to Comic-con for. But it had been filled up to bursting. Accommodating every hard-won ticket sold filled the show well beyond reasonable. In previous years, if the crowds or the big ticket events were too full up you could go and relax in a tiny out of the way panel somewhere and still get some of the show experience while you settled down. Last year even the smallest of panels ended up full, often with people getting turned away at the door. Disappointing only begins to cover it. It was a struggle getting what you wanted out of the place.

I would still recommend it, at least as an experience. The event is such an important draw, bigger than anything of its kind on this coast.  But it's hard to be a casual fan now. I couldn't picture bringing my nieces or nephews or even my older brothers to the show without explaining that it'll be a tough trip. Comic-con should be for everyone. But the sad truth is that in the location venue, not everyone can fit.