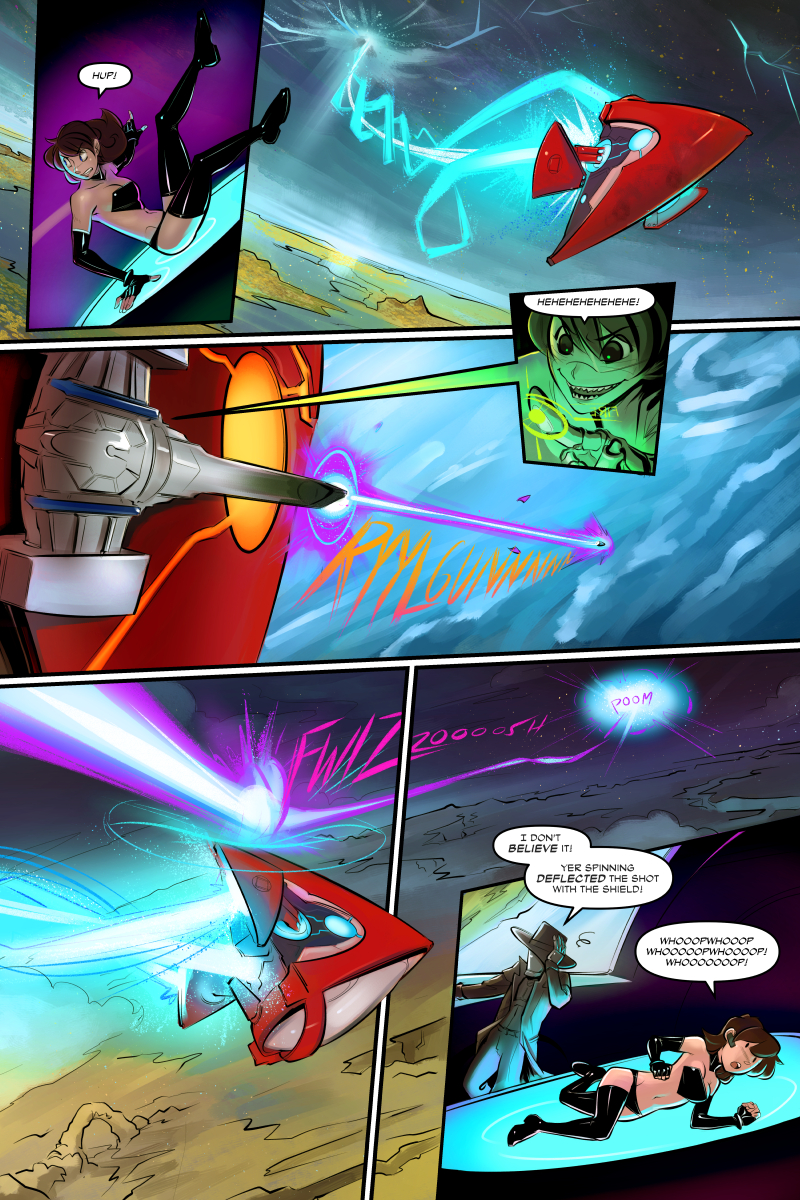 Someone made a Cassiopeia Quinn TV Tropes page. Not sure who it was, but thank you to them! We hope it carries on for a long time and becomes full of snark.

A little analysis of this page, combined with Psu talking a bit about the "#fourcomics" hashtag, leads me to believe that it's visually influenced the by Spaceman Spiff Sunday strips from Calvin and Hobbes. You know, with the little red ship streaking down to a bleak planetary landscape? Just a thought. I don't think we'd have been brought here, making this page, without those – we've both read every single one, of course.

By the way, I was about a second away from having Theira say "kekekeke" there, but StarCraft was never my online game of choice, and I was afraid of using the meme wrong. Similarly, I was thinking of having someone talk about how a barrel roll helps you deflect weapons fire as in Star Fox 64... but I've come to think there's a difference between having influences you can talk about to the audience later and uh, just kinda shouting them out in your work and hoping that people think you're cool for it.

This week's webcomic recommendation is gonna be The Rock Cocks by Brad and Leslie Brown, who also make previous recommendation Blaster Nation. I'm a big BN fan (AND those two are why Psu and I tried to get with Hiveworks in the first place) and this is a new comic that they're doing at the very same time as that one. It's bound to be a lotta work, but you can really tell they're passionate about it, and I like the story. Just be forewarned, it's a comic for 18+ people and there's a lotta naked stuff goin' on, but if you're cool with that (and more importantly, like characters who rock), you should totally head over there.

In other news, the Dwarf Noble option in Dragon Age: Origins was fantastic. Favorite one I've seen. Wish I'd checked it out years ago!

I don't think I've had anything even remotely resembling normal sleep in the past 7 days. And ya know, I kinda like it! I just wonder if that makes it tricky on my roomies who wanna tip toe around a sleeping roomie. I do insist though, they should feel free to make noise and stuff. In any event, the only roomate that doesn't respect my privacy so far is the big cat. And unfortunately it's kinda hard to teach a cat about personal space...