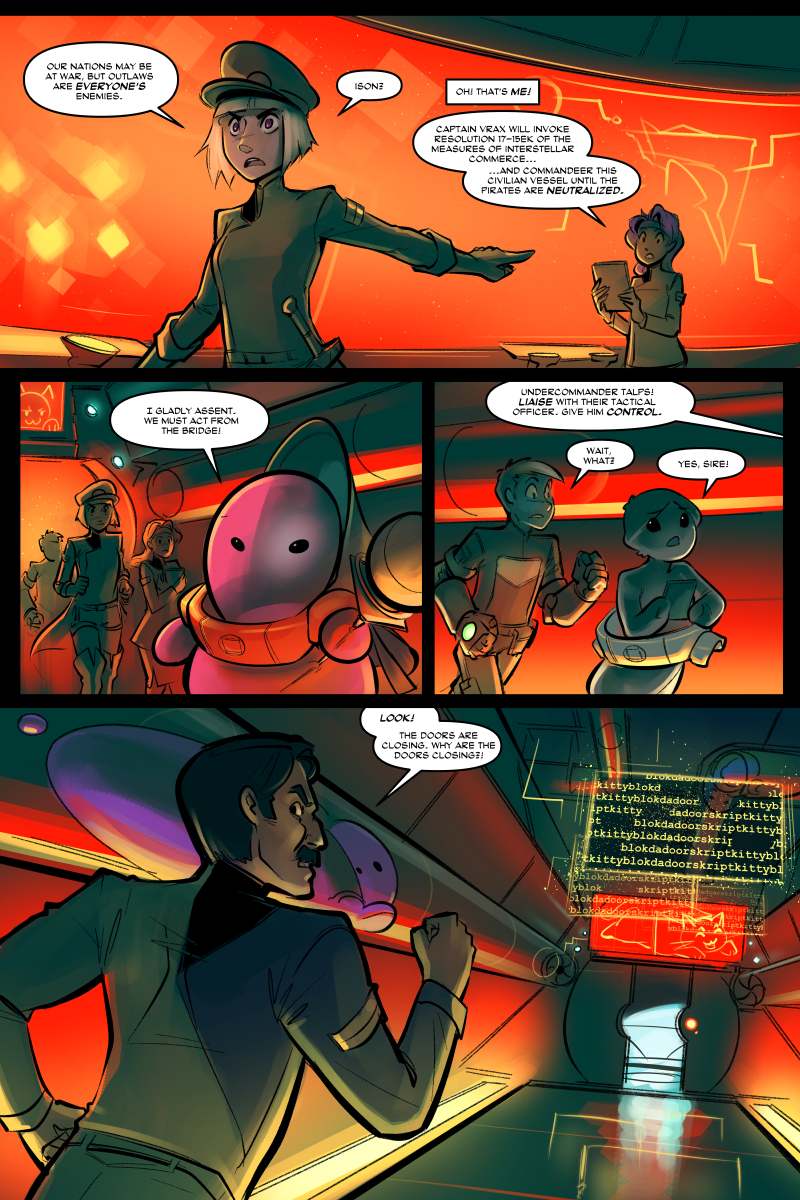 The idea of commandeering a car or whatever is really familiar to anybody who's watched a large suitable number of cop-based action movies. Commandeering a space ship might seem a little harder to believe, but to understand why it makes sense, it might help to have an idea of how much of real-life admiralty law was (and is) about sailors just hating pirates.

It's a lot. If you look up the real-life old timey statues on the subject, pirates (that is, people who illegally prey on shipping) are outlaws in the real, old-fashioned Robin Hood sense – almost no legal protections! And it's considered the right thing to do your utmost to get rid of them. Heady stuff. No wonder there are like a million and one adventure stories about it.

Okay, that aside, nice details I like on this page: Talps turning herself back a little glooby so she can use her datapad, which is not meant for fingers (not my idea), Script Kitty pretending to be stuck in a kitty door (my idea), and the Vanaa in the Futurama-style tubes. They don't really need full-size hallways to get around, after all!

Gunwild is a stickler for these artist comments out of me, even though I still think I could take 'em or leave 'em. This one in particular comes at a moment when I'm still kiiiiiiinnnddaaaa groggy from an evening nap. I basically have the weirdest sleep schedule right now. And I think back to the creator of one of my favorite twin stick shooters, "Everyday Shooter" Jonathan Mak. The dude made it himself and it was very very beautiful. I should get it for Steam at some point. ANYWAY, I remember an interview by him where he sorta mentioned he was only ever awake for 8 hours at a time and ate basically nothing but hashbrowns... I wonder how long it'll be before I end up a crazy hermit with a similar sleep schedule.